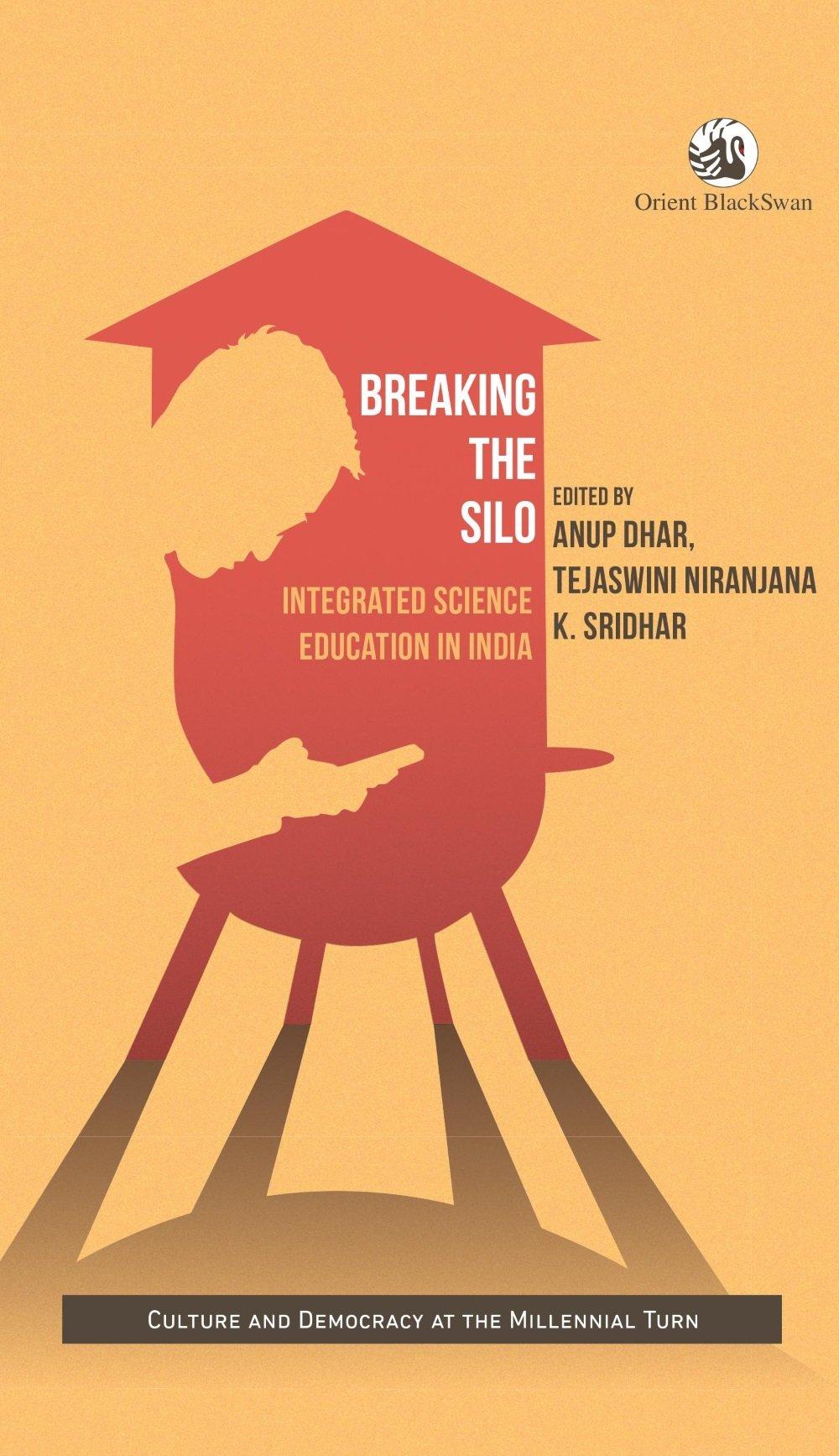 Breaking the Silo is a novel and engaging look at three very pertinent themes in the present time: (i) the persisting divide between Science and Humanities disciplines in Indian institutions of higher education, (ii) the existing contexts and future possibilities for integrating what appears to be ‘two cultures’ and (iii) bridging the perceived gap between the natural and human sciences. These themes have been addressed in this book via reflective reports on pedagogic strategies in integrating Science and Humanities education that was operationalized by the CSCS (Centre for the Study of Culture and Society) in the period between 2006–14. The book is part of the series, ‘Culture and Democracy at the Millennial Turn’, which broadly seeks to engage with the ‘spirit of the times’ or millennial development goals that animated topical debates in the field of education and research. The significant goals and debates addressed in the context of this series title include the viability of experiments in fostering independent, privately funded spaces that could break free of the ‘disciplinary silos’ of orthodox institutions and engage with a range of academic practices unencumbered by ‘institutionality’. Breaking the Silo engages with the little-discussed topic of integrated science education (hereafter ISE) in India in our times and is, therefore, a significant contribution to scholarship on pedagogic practices in science and the humanities.

Breaking the Silo organises its contents through an emphasis on its broad thematic concerns as outlined at the start of this review. The Introduction and Section One titled ‘What it was all About’ offers an introduction to Higher Education Innovation and Research Application (HEIRA), the higher education programme of the CSCS, Bengaluru, that set out in 2008 to tackle the problem of disciplinary silos in knowledge domains of Science and Humanities. This was done through a series of institutional collaborations, namely with the Indian Institute of Science, Bengaluru, the Indian Institute of Science Education and Research, Pune and the Central University of Jharkhand. This section outlines the scope and aim of, what came to be known as, the ‘Integrated Science Education Initiative.’ This initiative reflected and deliberated upon the pedagogic inputs for the students of natural science, engineering and technology.

What is very interesting for the reader in this section is a history of ‘Science and Society’ initiatives in post-Independence India in a chapter by Dhruv Raina et al. Incorporating personal accounts of teachers and administrators, this section throws light on various obstacles and successes in the path of integrating the disciplinary concerns of the natural and human sciences. This section focuses on questions exploring ways in which various kinds of ‘integration’ efforts have succeeded or failed vis-à-vis science education in India. The questions ranged from an analysis of the fate of Philosophy and History of Science courses in various public and state institutions in the country to what made HEIRA’s integration efforts different from the ongoing attempts in institutions like the IITs. Section Two titled ‘Beyond the Metropolis’ and Section Three titled ‘Ways of Knowing, Seeing and Doing’ form the bulk of the book and are an exciting contribution to research and thinking in higher education in India. These two sections comprise chapters by instructors who were part of the Integrated Science Education Initiative and each one focuses on the ways in which their individual ‘integration’ attempt at CUJ and IISc were ideated, executed and received. Instructors who formed a part of the initiative come from disciplinary backgrounds as diverse as Physics, Sociology, Literature, Film Studies, Biology and Psychology among others. Their individual chapters in the volume offer not only a reflection on how they built and transacted their own courses but most significantly, the ways in which their involvement in an ‘integrated’ pedagogic experiment at premier science institutes in the country compelled a rethinking of their own disciplinary locations.

This book will be of interest to educators from all disciplines in the Human and Natural Sciences as the bulk of its content comprises detailed and reflective course descriptions that suggest important directions in which curricular and programme design can go in undergraduate teaching. The reflections on a history of ‘integration’ experiments in India in Breaking the Silo are also especially useful in the context of the burgeoning number of private actors in the field of education in India. Private universities today function with fewer bureaucratic hurdles in their operations and can revisit and interrogate disciplinary silos in ways that public institutions may find more difficult. This book offers several important points of departure for newer, private educational initiatives that are already engaged in the process of reimagining Science and Humanities’ education in India.

However, a discussion of a standardised model of evaluating the courses taught across different sites and operationalizing a conceptual ‘integration’ across different disciplines would have improved the reader’s overall impressions of this experiment. For instance, course reflections in the section titled ‘Beyond the Metropolis’ read like concept notes for approaching specific interdisciplinary topics and do not engage very deeply with assessment strategies or modes of evaluating how students themselves (especially those in a non-metropolitan context, encountering disciplinarily alien content) approached the courses. While this could have been more a function of greater or diminished flexibility afforded by the institutional structures of the different sites where these initiatives were launched, the book could have featured a more standardised model of organising instructors’ responses to the teaching of their individual courses. Another gap is the book’s silence on how certain challenges that appear to recur in the ‘integrated’ classroom can be approached by any such future attempts. These challenges include, for instance, the perception among students at premier science institutes that courses in the Humanities are an insignificant and unnecessary part of their curriculum, and students’ low competence in English in particular and language in general, especially in non-metropolitan contexts. With an ever-greater number of students joining higher education from backgrounds of great socio-economic disadvantage, any educational initiative that aims to introduce Humanities’ subjects should be able to anticipate and address the issue of language competence.

Breaking the Silo leaves the reader with an informed understanding of why integrated science education is essential, but doesn’t explicitly isolate a set of reasons for why it hasn’t been very successful in India. It does, however, convey an overall impression about why ISE has remained ‘experimental’ and has failed to become an institutional fixture in higher academic institutions. For this reader, the obstacles to ISE in India that seemed most pertinent and in need of redressal were: a) the lack of teacher-capacity in interdisciplinary areas like History and Philosophy of Science, b) institutional apathy and disregard for knowledge domains outside their own ‘silos’, and c) curricula that are unable to equip students with the capacity to identify and solve ‘problems’. Philosophy of science courses or ISE themed courses that have a very short lifespan in institutions which largely foster courses in disciplinary silos cripple the possibilities of creating future teachers/researchers in interdisciplinary areas. Even when courses in the Natural and Human Sciences equip students to identify ‘problems’ in their chosen areas of study, these remain firmly rooted in a discipline and are often divorced from the multiple everyday contexts in which they operate.

Some omissions notwithstanding, Breaking the Silo signals at the importance of integrating the Human and Natural Sciences as a way of interrogating and enriching both disciplines rather than one mounting a critique on the other. Integration experiments like HEIRA illustrate the importance of fostering curricular spaces that facilitate questioning of the methods, objects of study and everyday practices of any knowledge domain.

Your file "Engineering Applications of Artificial Intelligence.pdf" is being processed. Please wait... You will receive a notification when the file is ready to download You can then download the file.